When native English speakers don’t understand each other

We have chosen to teach a neutral English accent that doesn’t lean too much into British, American or Australian but something that flows naturally between all 3 so that you can easily transition between these accents and understand as many people as possible.

I grew up in East London where the common accent is called ‘Cockney’. This accent is usually known for dropping the sounds T and H from words and also dropping the F from the word ‘of’. For example: Can I get a bottle of water? (Try to read that sentence without saying the letters T, F, H). It can also sound like a nasal accent and requires lazy tongue and teeth contact, people often convert the ‘TH’ in ‘without’ to ‘wivout’ because it is just easier to change TH to V.

I moved out of London in 2016 to study a Masters degree in Birmingham. Now, Birmingham is infamously known for its accent, which is also called the ‘Brummie’ accent and is one of the least favourites in Britain. The Birmingham accent is known for sounding melancholic and monotone with a downward inflection. One of the distinctive features of the Birmingham accent is how they pronounce the vowel ’i’. For example, someone from Birmingham would say ‘oroite’ when pronouncing the word ‘alright’.

When I came to Australia and started taking and making phone calls, this was a slight game changer for me. The problem wasn’t that I was asking them to repeat sentences because I couldn’t understand a word, I couldn’t understand anything Aussies say sometimes, especially if they are from Queensland. And I’m saying this as a native English speaker who speaks a mixture of Cockney and the standard English accent (also known as the Queen’s English).

In case you think I’m alone, look at this tweet from an American person who has set their Siri to UK English. 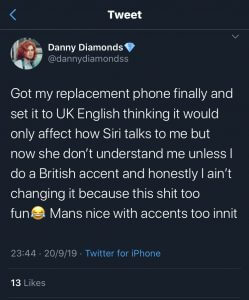 All this confusion about English accents might take you to this question: Which accent should I use if I want to reduce my accent? Good news is, we have already thought about this problem and found a solution. We have chosen to teach a neutral English accent that doesn’t lean too much into British, American or Australian but something that flows naturally between all 3 so that you can easily transition between these accents and understand as many people as possible. To find out more, book into one of our free accent assessments and we’ll help you decide the best direction for you to go in.